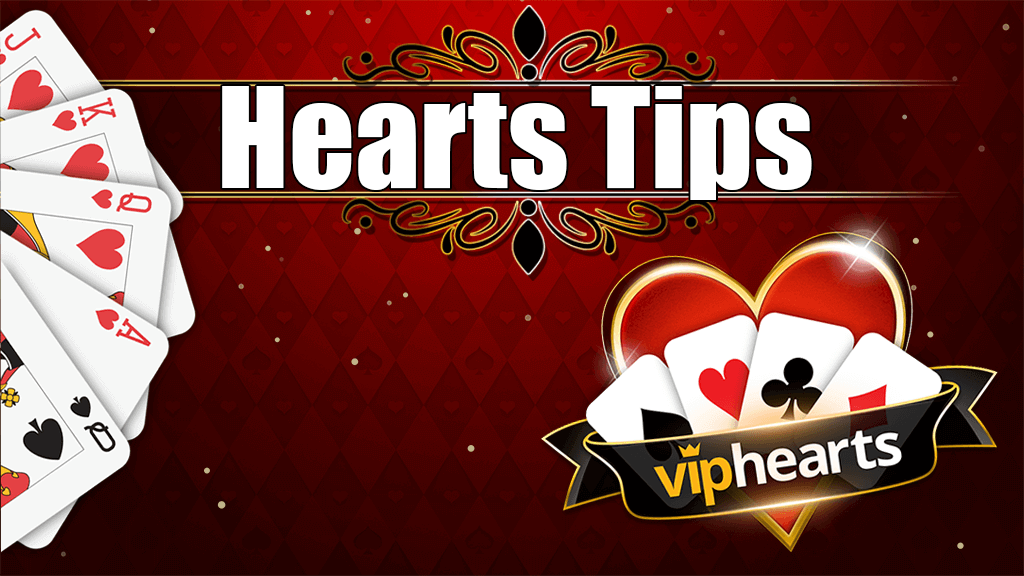 There are different strategies and approaches when it comes to winning at Hearts. In this article though, we will take a look at certain tips from players for specific situations. As it goes with every set of rules, every tip you read here has an exception and shouldn’t be trusted upon in 100% of the situations. So whenever you read “Always” or “Never” below, take it with a grain of salt.

Tips for Passing Cards in Hearts

Consider the following scenario: you void yourself out of any Spades, so you can slough unwanted cards when someone plays them. Then you are passed the Queen of Spades. That is instant 13 points on your account. Try holding to as many Spades as possible. Not only will you have a stronger defense if the Queen of Spades is passed on you, you will have the opportunity to bleed the Spades dry and force an opponent to play the Queen if it isn’t in your possession.

Exceptions: Clearly, if you have few Spades you should get rid of Q, K or A in your hand, as they possess a risk.

Never Pass the Ace of Hearts

It can either serve as a stopper for someone who’s trying to Shoot the moon, or it can be a valuable card if you are shooting yourself. Even if you don’t have any other hearts, nor suitable cards in your hand to try shooting, you should never give initiative to someone else.

Pass the 2 of Clubs

That card determines who will start the play. The reason you don’t want it to be you is that it is a great advantage if you actually win the first trick. No penalty card can be played in it, and if you are leading next you can choose what suit to be played after that. If you possess the 2 of Clubs in your hand that is simply not possible. Which brings us to the next tip…

Never Pass the Ace of Clubs

As explained in the above hint, winning the first trick can give you a great advantage. Having the Ace of Clubs guarantees you will lead the second trick and can point the game in the direction best suited for your hand.

Exceptions: If you don’t have many low-cards to lead on the second trick, there is no incentive of winning the first one. In that case passing the Ace of Clubs to the player to the left is the best idea, since you will play a card last in the next trick.

Always Pass the Queen of Spades to the Right

Every time you pass cards to the player on the right, give him the Q of Spades if it is in your hand. You won’t have to worry if you have K or A of Spades (unless they are the only Spades you have of course).

Never Pass the Queen of Spades to the Left

Logically never put yourself in a situation where the player after you decides when the Q Spades is played. Even if you don’t have high Spades, you risk him sloughing it to you when another suit is played.

If you play off-suit on the first trick it’s a dead giveaway of your strategy to the other players. They will know you voided your clubs and will adjust their game accordingly. Have at least one club for the first trick.

The moment someone breaks the hearts, it is almost certain that the next trick will be hearts. If you are all out of low hearts to go under you will be left with 4 points and leading the next trick.

Pay Attention to What Others are Passing

You can tell a lot about the strategy of the player who passes cards to you by looking at those cards. If all three are of the same suit, the chances are he is building a void. If he is passing you only low cards, maybe he will be trying to Shoot for the moon. Take notice of this information and play your tricks accordingly.

If You are Going to Take a Trick, Use a High Card

It is the most logical thing to do. If you can not go under, at least throw your highest card of the suit. This leaves you with a lower chance of taking a trick from the same suit again.

Never Lead with an Ace

Especially if the Queen of Spades hasn’t come out yet. You never know when someone has voided that suit and will give you a nasty card. Leading with an Ace guarantees you will win the trick and all the consequences it comes with.

Expectation: If you are trying to Shoot for the Moon and have enough high cards, or if you are holding all the high spades (Q, K, and A), sometimes it is a good idea to lead with the ace in order to secure the trick.

It doesn’t sound like a good idea at first, but by doing so you guarantee no other player will successfully shoot the moon. Sometimes 2-3 points are a small price to pay for safety.

Void Diamonds or Clubs as Soon as Possible

This way you can concentrate on getting rid of unwanted Hearts and A, K, Q Spades.

For more tips and strategies on how to play Hearts, you can check: