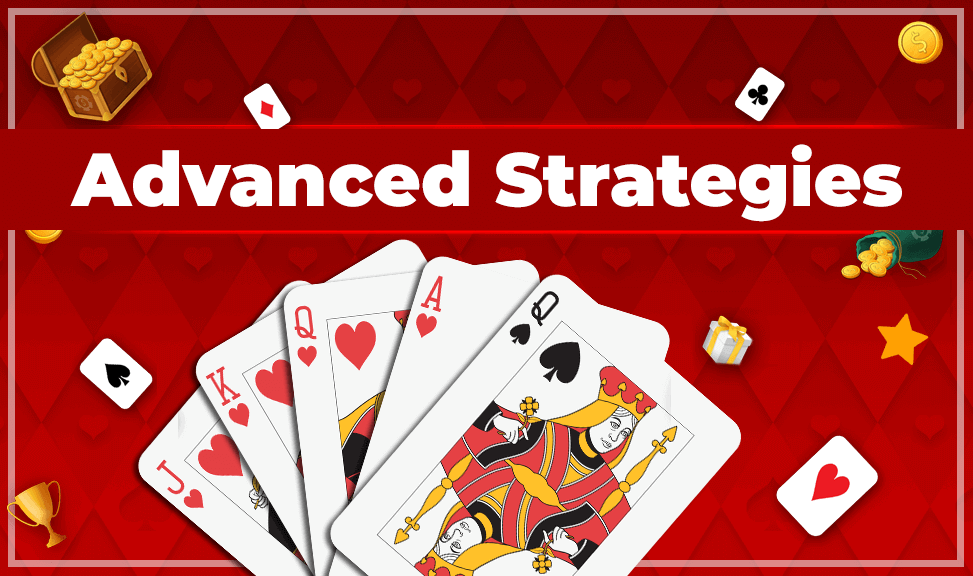 Did you get used to the basic passes which were explained in our previous article: Styles of Play in Hearts? If that’s so, you can move to the next level with more advanced ones! Here are some clever moves when it comes to passing and counting. Learn them, practice them, and gradually become the most skilled Hearts player at each table!

Here is how you can annoy the hell out of your opponents just by using a combination of one, two or three cards:

The most annoying strategy with one card

Maximise the annoyances using a pair of cards. Example for such combinations to use are:

Triple the gain with triple cards

Basically, it’s like using the two cards strategy, but amplifying the effect with a third card when you have the chance to.

Get rid of the Queen

Do you have not only the Queen of Spades, but also the Ace and the King? No worries! There is an easy way out of this situation. Bleed out the spades! This strategy consists of trying to draw all the Spades out of the other players.

But how exactly can you do that? Let’s take for example a situation in which you have the Ace, King, Queen, Jack and 3 of Spades and you don’t have many Hearts. You can’t Shoot the Moon and you definitely have to do something about those high cards as soon as possible or you will end up with 13+ points! The trick here is not hiding the fact that you have the Queen of Spades, but to focus on the numbers!

Most of the time people tend to try hiding that they have the Queen and starting with the King or Ace will have the complete opposite effect. But don’t worry! You don’t need to hide it! In a situation like this when you have those 5 Spades cards, it means that there are only 8 left among the other players. Take the lead and put the Ace of Spades on the table. The chances are high that with this move you will take 4 cards in total out of the game. Next put the King of Spades on the table. If you are lucky – 4 more cards will be out. Now use the Jack. Supposedly this time you get rid of only 2 and finally with the 3 of Spades you will take out the last ones.

So now the only Spades card left in the game is the Queen of Spades and everyone knows that it is in you. This doesn’t matter as no one can make you take it and you can hold onto it while building a void so that you can slip it to someone else in the end. But be careful! It is important to do this as quick as possible so that you don’t end up taking the lead in the final rounds. If that happens you may be forced to play with the Queen and end up getting it yourself.
Of course, if someone has more than four Spades this strategy could fail. But a suit is rarely so unevenly divided considering that five of the Spades are already in you.

Three vs. One: the unspoken agreement

Have you been in this situation when one of the players is way ahead of the rest and it is obvious that he is going to win unless some miracle happens to prevent that? Then suddenly all together you just start sabotaging that one player without saying a world.

This kind of strategy just comes naturally at some point in the game. You don’t need to make plans for it or agree to it beforehand. It just happens while the scores of the players rise and fall.

As it is not something that you have discussed before the game there is a chance that the guy second to the lead won’t want to participate. If the points between him and the lead are little he may want to stay second until the last stages (so that this strategy wouldn’t be played against him). Then he will probably try to do something like passing the Queen to the supposed winner and a few Hearts to someone of the other two players.

When you gain enough experience in the game of Hearts, you will be able to communicate with the other experienced players only through your passes. Typically, a contractual pass happens when you are losing and the lead is way ahead with his score.

When a situation like this occurs there are two contractual passes that can help:

Making a pass of the Queen of Spades + two other Spades

With this pass, you are saying that you want to foist the 13 points to the lead, but you don’t have enough Spades to do that safely (as you may end up with the Queen yourself). So you are entrusting the passee with her and a few other Spades and you hope that he would be able to accomplish your wish using all those Spades combined. In return, you request that he will not pass the Queen back to you if you are forced to use Ace or King of Spades.

Doing so you are hoping that:

Help the player to Shoot the Moon

The situation here is that the player you are passing to is losing by a lot and the lead keeps dropping points on him in order to make him go over 100 points and quickly finish as the winner.

Of course, you don’t want this to happen, so your strategy would be to help the loser Shoot the Moon. In doing so he will catch up with the score and the lead will fall behind. This way the scores of all players will be leveled out and you will have another chance to win.

How do you do that? There are two combinations of cards with which you can help the passee to Shoot the Moon. The first is: three high Hearts (usually the Ace, the King and one more) and the second one is: the Ace and the King of Hearts + the Queen of Spades.

By doing so you are hoping that:

Become a pro! Count the Cards

The strategy of counting the cards is mainly used by professional players in the casino games. Not many people can, but when someone does he most likely can win every card game barely even trying! There are a few ways in which you can count the cards depending on how good you are at this.

Count how many cards from a suit were played

This is the easier version of the strategy. Don’t count all the cards, but just how many times a suit has gone by. In other words, if the cards are distributed evenly, you can take the whole suit out in 4 rounds. Also if you want to know how many cards have been played you just have to multiply the number of tricks by four and voila.

Track how many times a certain suit has been played

This tactic is a little bit more complicated and hard to fulfill as most people can keep track of only one suit. The most common suits to keep track of are:

It is also very helpful to keep track in which suit the other players go void and when that happens which suits are they trying to get rid off with that void.

Look out for stoppers

This is a strategy most suitable for the Shooter! If you are trying to Shoot the Moon, you should definitely learn to keep an eye on the cards that can ruin your plan. You should figure out in the very beginning which are the cards that your toppers can’t beat. Thеn count every one of them while the rounds are passing so that you would know when you can safely shoot the moon.

Counting which cards have already passed

The most effective and most difficult way of counting the cards is by keeping track of each one of them. You have to know in every moment which cards are out of the game, which are still in it and in the meantime you have to watch out for stoppers! Not many people can do that, but if you are one of them the power over the game is all yours.